Great dialogue in literary fiction serves multiple functions but never detracts from story progress or purpose. Writers who write dialogue well have a special gift that they’ve continually nourished. We can all learn to improve. Here are thoughts to stimulate practice in writing dialogue that complement your literary story writing.

“If I were in heaven, Nelly, I should be extremely miserable.”

“Because you are not fit to go there,” I answered.  “All sinners would be miserable in heaven.”

“But it is not for that.  I dreamt once that I was there.”

“I tell you I won’t harken to your dreams, Miss Catherine! I’ll go to bed,” I interrupted again.

She laughed, and held me down; for I made a motion to leave my chair.

“This is nothing,” cried she: “I was only going to say that heaven did not seem to be my home; and I broke my heart with weeping to come back to earth; . . .”

In fiction, successful dialogue serves one, and usually more of these purposes:

In great fiction, dialogue is not intuitive, and it does not come naturally to writers. Most importantly, for effective dialogue in fiction, authors cannot simply describe a dialogue from real experience or from an imagined scene. Basically, dialogue is always created for the purpose of story development, therefore, it cannot function as a taped recording of reality; and it must be stripped of nuances that may not be true to the story or confuse the reader. In revision of dialogue, these questions are useful: Is dialogue logical? Does it fit character desire and motivation? Does it support theme and meaning? Does it move?

B. NO AUTHORIAL THINKING IN DIALOGUE

“Is that a Gila monster?”

Comment. This is not a usable dialogue. This fills time and page-space, but it does nothing for drama or story. What about– “Stay back, they bite.” But this has no realism to it. When nothing is working, look for a greater problem. Should the idea be expressed in dialogue? Let’s think about this for a minute. “Is that a Gila monster?” may not be direct character dialogue that is useful in any story. The dialogue is being used to inform the reader of the presence of a potentially dangerous creature. For dramatic fiction, a scene must have a purpose, and it must have action. “Is that a Gila monster?” has no effect in fiction; it sounds contrived; and it needs drama with conflict between the character(s) and the forces of nature (monster). Realistically, the dialogue speaker must be afraid, or planning escape, or figuring out a way to kill it, or admiring it’s unusually threatening size, etc. A key revision might be to remove this information from dialogue.

Although frequently necessary, dialogue limited to two characters can quickly become dreadfully boring (and even when talking to self in internal monologue). Conflict is essential, as in every dialogue passage, to maintain the necessary energy for the dialogue segment. Creating dialogue takes practice. 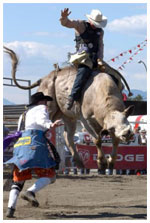 Conflict inserted. (With exposition that may not be reasonable for some readers.)

“You don’t know nothin’.  He damn near killed Prettyboy.  Knocked him out for two days.”

“Shouldn’t be in the draw, anyway.  No reason to get mangled by some crazy man killer.”

“Comes from a family of good bulls.  Wish I had more like him.”

Never use rules to guide your dialogue creation but do carry a caution about simile and metaphor. It is often impossible to find the right simile that fits into the context and is credible dialogue for the character’s intelligence and experience. Here is an extreme example.

“Ignore her,” she said. “She looks like Marie Antoinette with a sex change.”

Comment. This is simply dialogue created by an author who is unsuccessfully trying to be clever and failing because the simile has no meaning or valid imagery.

Comment. Even if the author argues that this is in the vernacular of the character, and helps define him or her, the simile is cliché and adds nothing to the writing. Any metaphor that calls attention to itself in dialogue should be deleted. 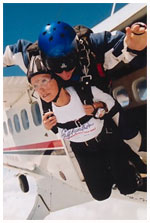 “It’s one of the most difficult maneuvers we have in sky diving.”

Comment.  No conflict, even when there is opportunity for conflict. Totally static writing, and not credible. The pacing is wrong for the content. And it contains exposition (about sky diving).

“Think of Janie and Sally.”

“No time to think of my children.”

Comment. Exposition about children: inappropriate for this story scenario. If children’s names are already in story, this is redundant, and even if not previously introduced, mention of children is not logical if someone is about to jump out of an airplane; that is, it is not a useful response to a fictional situation. Note that for the experienced skydiver, jumping out of a plane might be an everyday experience that would allow discussion about children, but rarely, and it would take careful construction. In fiction dialogue, the emotion at the time of jump must be strong and felt by the reader through the dialogue. No sense of emotion comes through in this dialogue, making any discussion of children unlikely.

“You’re saying that to scare me.”

Comment. Some conflict, which is an improvement. But this is not usable dialogue. Purpose must relate to story, and purpose must be right choice for a dialogue segment. Clearly the author in creating this dialogue has confused purposes in mind. Is this segment about defective equipment? Desire to direct someone, blame someone? Learning about one or both characters–if so, learning what? A good writer demands dialogue work for the story, has a clearly identifiable purpose related to the story and story moment in time, and does not allow defective dialogue to slip into the writing.

If this really is about defective equipment, maybe it shouldn’t be in dialogue. Probably better in a narrative passage.

“Count. Pull the cord. You’ve got to be clear.”

“Where is your chute?”

Comment. “You’ve got to be clear.” probably means clear of flying objects, including the plane.  This is information no one would say—it is too obvious.  This problem usually indicates need for narrative passage or information delivered in another way, possibly internalization.  Also, is “You’ve less than ten seconds.” credible structure for dialogue?  Wouldn’t a character say “Hurry!”  Same revision logic for “Count. Pull the cord. You’ve got to be clear.”  “Pull the cord!” is more efficient and acceptable.

Comment.  Assuming two experience skydivers are in an in-flight emergency with one parachute is already established, there is an opportunity for learning about characters—a moment of grace.

Beginning writers often spend years seeking the right sound for their dialogue. Sound is important, but only when the dialogue fulfills a primary purpose of doing something important for the story. There are many ways to make the dialogue sound good. To be aware of the sound, it may help to read out loud, and if you’re serious, record and listen to yourself. Always remember the dialogue in fiction is not the way people speak, yet, paradoxically, it has to seem to be the way people speak. How to do that? First, there has to be a natural rhythm to the context in which the speech is given. If dialogue is related to an audience with the Pope, speech patterns will differ from those in a bar conversation with Jelly Roll Morton. When writing, notice how the same content can have incredibly different rhythmic presentations. Create alternatives, choose the best for your writing and story. Musicality is more important in some styles than others, it is always present, but it must not dominate when story-purpose of dialogue might be lost.

The challenge of creating your own effective dialogue will not come from copying some writer you love to read. Of course, read and learn. And then practice. But in the long run, you will need to make many decisions about dialogue in your stories. These decisions–essential for voice, movement, clarity, purpose, and credibility–are based on how you think about and create fictional stories, and can only be solved by you. You are the creator, and when you succeed, your writing will be well received, and you will have found your own unique style.