A writer’s imagination in fiction opens the gates to creating great literary stories. To shape great literary stories, authors master skillful characterization and apply centuries-proved story structures that have matured from creative writers of the past—Tolstoy, Chekhov, Dostoevsky, Flaubert, Bronte(s), Sophocles, Hemingway, Faulkner, and so many others.

Most writers today want to realize their dreams of a writer’s life style and acclaim; they write for admiration, fame, and fortune. Nothing wrong with that; it’s a path to happy successful careers for many. But some authors want to create meaningful stories that might contribute to understanding constantly evolving humanity, stories that are read and reread and passed onto future generations. Homer, Austen, Conrad, Melville, Forster, Woolf, transmit the soul of their generations with lasting, penetrating impact, and for examples, by uniquely portraying thoughts and emotions, nature of love, core human desires, sense of morality–all with drama, imagery, and action.

How can a writer today achieve memorable meritorious stories? Study the techniques of the storytellers of the past that are indelibly etched in the collective human consciousness. Discover elements of powerful lasting literary stories that work for you as an author and incorporate those elements into your writing and storytelling.

Stories are about events and people. In great literature, story frequently reveals not only what happens but how humans live and how life changes them. There are no secret formulas but there are commonalities that generate power for stories to move and evolve with mankind into future generations. Here are elements for thought.

1) WRITE WITH PURPOSE. As you write, know what drives you to write your story. An author who has a purpose–to show effects of victimization, for example–clarifies prose, scenes, characters, narration, point of view and plot that become more focused and unified, especially in revision. And make a purpose for writing story selfless, not “I want to be famous” but “I want to find what will make an impact on readers.”

2) THEME AND MEANING. Theme is recurrent idea; meaning is significant ideas. What can a reader learn from reading that is new and significant? For example, what makes Red Riding Hood, as a story, persist in memory. The story theme for many is innocence and vulnerability. Meanings might be: obey your elders, don’t talk to strangers, predators exist in different disguises, etc.  There are many versions of the story, but essence of its longevity is story structure and imagery.

3) CHANGE. Characters change as stories progress and so do readers after reading a great story. Change examples: enlightenment (discovery or experience a new way of thinking), a shift in morality, a reversal, coming of age, etc. Here are stories with clearly evident character change (you can read these free online):

“The Necklace.” Through tragedy, discover the value of another human being.
“Reddog.” A rare truth is not an effective motivator when delivered by a chronic liar.
“The Activist.” Coming of age by making a decision to defy an abusive mother.
“Homunculus.” A circus dwarf loves a full-size apathetic trapeze artist and loses the valuable love of her coworker.
“Speaking of the Dead.” Discovering the healing value of forgiveness.

She was a kind, gentle, woman.

A telling, brief, but not engaging and less effective because of abstractions that may be highly variable judgments of the narrator.

“What are you doing?” John asked her with irritation.  Elizabeth slipped a ten-dollar bill from her shoulder bag.

“Don’t do that?” John stripped the bill from her hand. “He’s probably a faker. Fully capable of work. And probably more money stashed away than we have.”

Elizabeth found a twenty in her bag and handed it to the man who took it with without speaking or looking at Elizabeth.

“Damn it.” John grabbed Elizabeth’s arm and pulled her away. “The ungrateful son of a bitch,” he said.

“He’s needy, John.  Even if it’s only for a few seconds of attention and assurance that he exists.”

A showing with in-scene action, imagery, and character-specific dialogue.  The action in-scene allows Elizabeth-has-kindness delivered with more impact and credibility than “telling.”

6) STRUCTURE. A) Beginning, middle, end. Seems simple but essential when storytelling with emotional, intellectual, visual changes that need to be fortified in time progression. B) Carefully-considered timeline, essential to avoid common errors in credibility and logic. C) Character-based plots. Useful when plot progression depends at least partially on the nature of a character(s) strength and/or weakness and relies less on fatalism and serendipity for plot change. D) Logical and credible emotional arcs. Awareness of character’s emotional progress makes credible and logical sequencing of scenes. 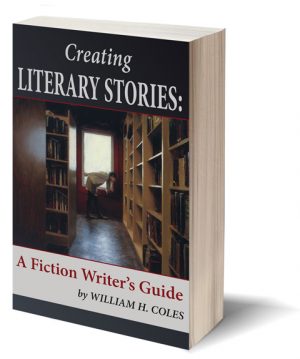